I originally published this post June 2012 on my cycling blog.  Decided to dig it out of the archives to share again with very minor edits!  Because 7 years have passed, there could be some big changes to the crash site thanks to snow, weather, time, and humans.

For some background… Flight 409 crashed October 6, 1955 en route to Salt Lake City from Denver.  Deviated from the flight path which was to avoid all the peaks in the Snowy Range (the plane could not fly higher than 10,000 feet due to be unpressurized), the DC-4 plane smashed into the side of Medicine Bow Peak about 50 feet from the top at 240mph.  All 66 people on board were killed, and at that time, it was the worst commercial aviation disaster in the United States (it only had the record less than a year, and remains the 43rd worst in US history).  Because of the stupidly remote, rugged terrain, the wreckage was never fully cleaned up.  The military was called in to destroy what was left with explosives and napalm, but despite all of that a lot of pieces of wreckage remain on the boulder fields below the site of impact.  Frankly, the terrain makes it damn near impossible to haul stuff out, along with it being federally protected, therefore making removing wreckage a felony (fine by me, I don’t need to be haunted by airline passenger ghosts!).

I’ve always had a pretty peculiar preoccupation with airplane crashes, probably due to what use to be an intense phobia of flying (I still fear being in a plane crash, though I do enjoy flying nowadays).  I’ve read about this crash before, and had heard about it from my parents and others while growing up.  So when I mentioned it to Matt and he suggested we find it, I was definitely interested!  We plugged GPS coordinates to googlemaps, and charted a rough path to get there, hoping we’d be able to find something.

We started out at the Lake Marie trailhead, but forged our own path over the boulder fields that litter the terrain below the sheer cliffs.  It was difficult climbing, and I was oh so thankful to have good boots for this attempt!  We hiked and hiked, working our way towards Lookout Lake, which seemed to be in front of where the wreckage should lay.

We made it out of the boulders to a small lake.  Ran into two guys from Florida that were just messing around and seeing how high they could climb.  We mentioned we were in search of a plane crash, which they had not heard about, and they wished us good luck, but expressed that it was possible it was under snow.

We bid the Florida guys farewell and continued on, hoping we would run into something soon… and WE DID!  A big, shiny, silver metal piece, right in front of us!!!  Could it be a piece of the plane?  I had my doubts because it was so low in the valley… hell, it could be someone’s trash, right?  Then I saw the rivets and other pieces!!  We had found the crash wreckage, and it was way easier than we expected, and looking up the boulders it was apparent that there was a lot more of it!

We continued climbing up, coming across more and more bits and pieces, including one of the engines.  I was definitely feeling a sense of awe over the amount of wreckage still laying on the mountain after 57 years, and the magnitude of the whole event. 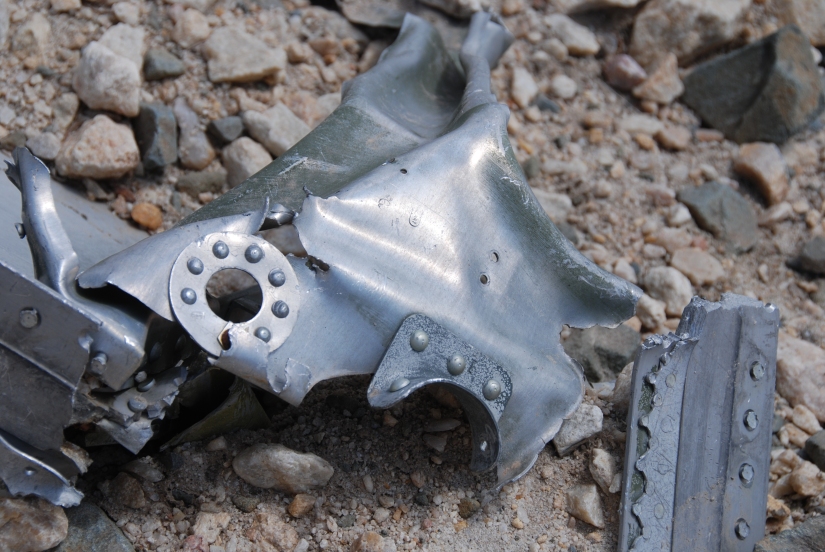 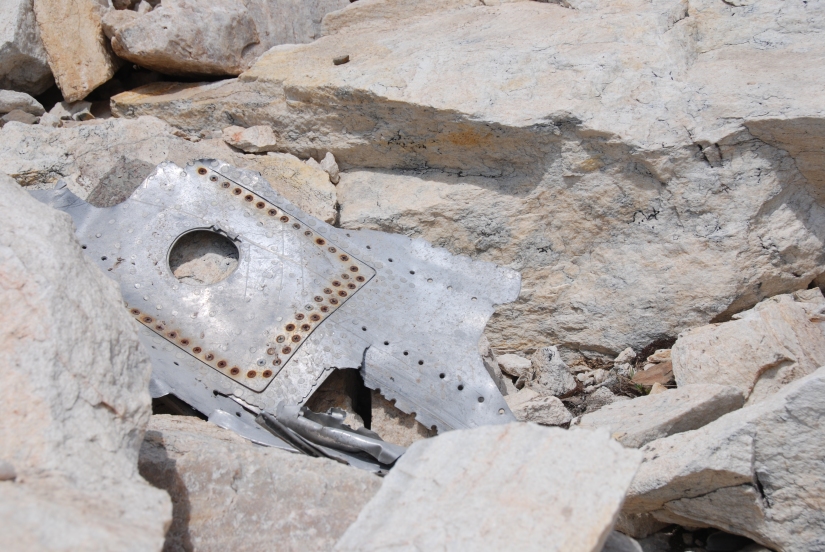 We had to stop climbing just short of 11, 000 feet due to the snowfield, which would’ve been way too slippery to continue up.  We ate a quick lunch, and snap photos of the amazing landscapes that were below.  I reflected on what it must’ve been like to smash into a mountain at 240mph… though, honestly, it would be the way to go: a nice, fast, unexpected death.  I’m sure only the pilots saw it coming, and even that can be up for debate.  It also reminds me how much air travel has become safer.

Now the steep descent down the loose rocks… I tucked my DSLR away in my backpack so I would have both hands free.  My knees took a beating, but we slowly made it down, finding more and more pieces of wreckage, including some very large aluminum pieces.

Mission accomplished!  I’m so happy our hike was successful and we found what we were looking for!  I was unsure we would find it, as all we had were some GPS coordinates, and a severe lack of “modern” day information on the crash and how much wreckage was left.  It is really difficult terrain to cross, so I am sure that keeps the casual hiker/curiosity seekers away.  The wreckage does not really reflect sunlight and blends in with the geology well, helping keep it concealed.

Our route back to the car took us on the Lake Trail between Mirror Lake and Lake Marie.  Overall it was a 3.21 mile hike, with about 890 feet of elevated ascended (most of it in the wreckage field, which was nearly a vertical climb at times!).