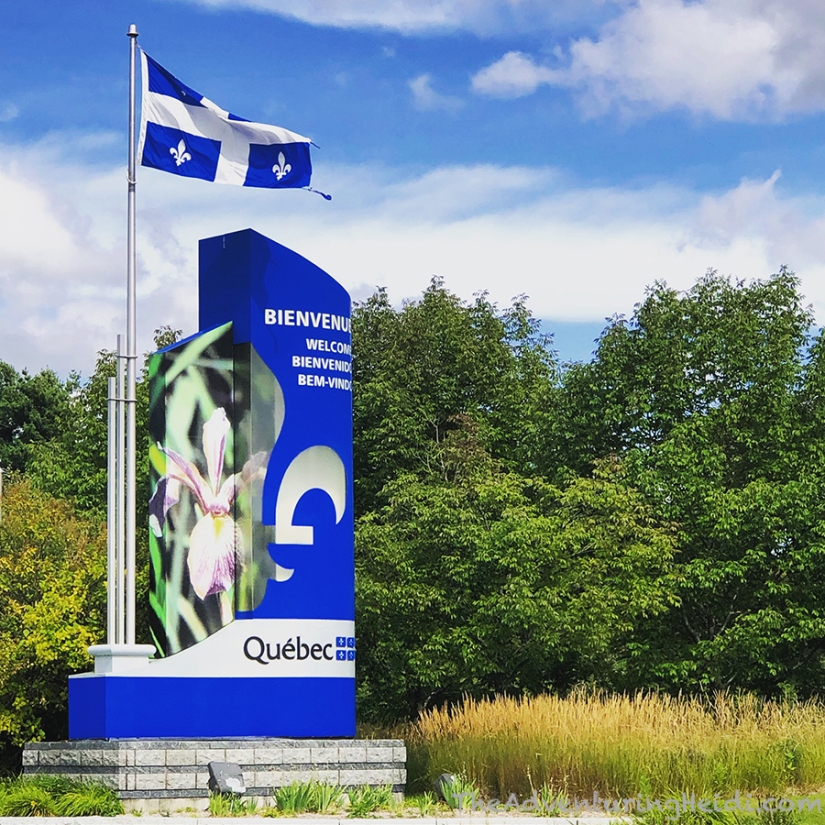 It was pretty simple:  there’s no way we could go to New Hampshire and Vermont and NOT go into Canada.  Neither Kubo nor I have been anywhere in Canada, and this was the perfect chance to do it relatively easy.  Like most of our plans, a simple idea of just visiting for a few hours ended up being an impromptu two night stay in a small village I randomly picked out on the map.

Saint-Alexis-des-Monts would be our homebase for our brief stay.  This is a small village of about 3000 residents, of which nearly 98% are French speakers.  The village is tucked into the Laurentian Mountains, and hundreds of lakes are found in the surrounding area.  Nearby is the Réserve Faunique Mastigouche (a wildlife preserve) and Parc national de la Mauricie (a national park).  Outdoor tourism is a major industry.

So north we headed from Conway, NH, setting out for what Google told us would be about five and half hours in the car… yeah, we took over seven, but whatever!  After some stops at waterfalls in New Hampshire and some snacks/gas in Vermont, the Canadian border was upon us.  The crossing was pretty hassle free, we gave our passports to border patrol, stated where we were going, and that we didn’t have any animals/plants/alcohol with us, and we were through!  Woohoo, my fourth foreign county in one year!  (That’s big for me… before September 2018, I had only walked over to Mexico a handful of times for any “international” travel.)

The thing about Québec is that everything is in French.  The road signs, everything.  Which isn’t bad, French and English are similar enough that I can read it fairly okay and figure out what things are meaning to say.  Pronunciation is completely different for me, as I was fluent in German and German pronunciation rules have always stuck to me, so it’s a lost cause for me to try speaking French.  I think sometimes people have the notion that everyone is bilingual in Canada, and we definitely did not find that to be standard in Québec, especially as we got off the beaten path.  Montréal?  Sure, I’m guessing English is fairly common.  Saint-Alexis-des-Monts?  Get use to sign language and grunts if you can’t speak French.  Between Iceland, Finland, and Québec, hands down the most “foreign” feeling place to me was Québec.  English is almost the default language in Iceland (doesn’t help they have a lot of service workers that are foreign and do not speak Icelandic), and for the most part people could speak English in Finland… so Kubo and I got by just fine in those travels.  But man, Québec… it was tough but an adventure all at the same time!

Anyways… we continued north, stopping here and there, and settling on getting some groceries in Trois-Rivières for dinner (I can’t turn down a grocery store trip in another country!) before continuing on.

I had booked a CosyBubble bubble tent on a farm stay just outside of Saint-Alexis-des-Monts on AirBnB called Chez Sophie et Richard.  Originally we had just planned to stay one night, but since the drive was oh so long (nearly 300 miles one way), we were able to extend our stay an additional night.  Richard and Sophie were the most excellent hosts, and we enjoyed their farmhouse and all the wonderful animals (including the MOST ADORABLE FAT CAT EVER!!).  They have a few guest room options that are indoors, but Kubo and I were all about the inflatable bubble tent tucked into the trees.  I mean, hello, how cool is a bubble tent!?  Richard and Sophie do speak English, which is a perk if you’re not French-savvy.  Breakfast is also included with each night, and is a wonderful meal prepared by Sophie utilizing fresh products from their farm.  Seriously, if you’re in the area and need lodging, definitely consider this place!  Their website is here. 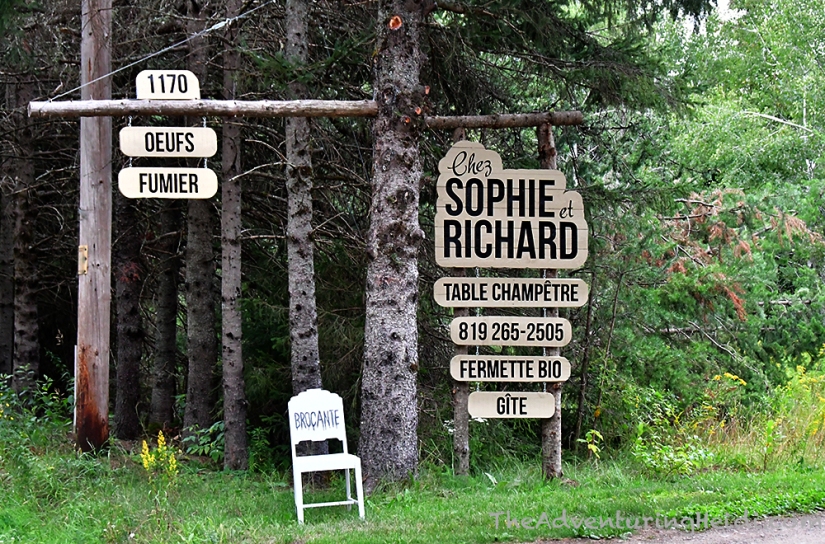 The next morning was rainy as we awoke in our cozy bubble tent, but Kubo and I are big believers in the mantra “there is no bad weather, just bad clothing choices” so we excitedly prepared for our day of exploring the region.  After our delicious breakfast we set out to town, first stopping at the local tourist information center, which is located by the big church (therefore, quite easy to find).  Sydney, the employee of the center, greeted as warmly and seemed very excited to get the opportunity to practice her English.  She was an AMAZING help with discovering things to do around town, and provided us with a great hand drawn map of some unique places to see and visit.  She even drew us additional maps of other places, and provided lots of brochures.  It is so refreshing when you come across someone who seems to truly love their job and helping others!  After leaving an English message in her guestbook (per her request of “please sign in English, I don’t have very many English comments”) we headed out to explore.

After a quick stop at the bank for more cash and the post office to mail some postcards back home, we pointed our car towards Réserve Faunique Mastigouche, the wildlife reserve that also has some waterfalls and hiking.  The drive was short (maybe 25 minutes), but there was a lot of beautiful places along the way, as the road followed the banks of Du Loup River.  Sadly, when we arrived at the reserve we learned that it was closed for hunting season and we would not be able to enter.  But alas, not all was lost as the drive was beautiful and we stopped on the way to back to enjoy some small cascades on the river (forever chasing waterfalls!).

The next destination was Lac Sacacomie, which is a very large lake.  There is a unique hotel nearby, which we briefly stopped at (Kubo wanted to eat there, but it seemed a bit too fancy for my liking).  We peeked at the public beach, and then made our way back to town to explore some of the other things labeled on Sydney’s map.

Pont de broche is a suspension footbridge built in 1900 which helped the local kiddos cross the river to get to the school house.  It looks really rickety, so I let Kubo scamper across it.  He finally convinced me to walk across it, which was absolutely terrifying!  But I made it across, and back again.

We couldn’t just not get in some hiking, so we decided for one quick jaunt up to an observation point recommended by Sydney.  We parked off of Rue Pellerin, and followed the ATV trail a short ways before turning off on the Sentier Lac De L’aqueduc hiking trail that will lead all the way to Lac De L’aqueduc.  Ideally we would’ve hiked to the lake, but we were getting hungry and short on time, and honestly we were tired (our whole trip in general was a busy, tiring affair).  The trail to the observation point was still amazing, even if it was a shorter hike.  Dense forests, mushrooms, and moss – what else could you need?

Hiking checked off the list, we headed to Microbrasserie Nouvelle France, the local brewery with steampunk decor.  We walked in and stood awkwardly at the entrance, and it didn’t take long for the waitress to make a motion to ask if we wanted to eat, and we sat ourselves.  Our waitress was great and had an awesome sense of humor about the language barrier going on.  This restaurant does have English menus available, which was handy.  Kubo opted for a steak with poutine (we couldn’t come to Canada and not try poutine!), along with a bowl of squash soup.  I opted for linguine with a homemade meat sauce (yeah, I ate spaghetti.  Hush).  We both got a berry flavored gluten-free beer option, and topped off our dinner with creme brûlée for each of us.    The food was excellent, and we both fell in love with poutine.  Overall, an enjoyable experience, and we recommend this restaurant if in the area!

The weather elves smiled down upon us and the skies cleared up in the evening so we could enjoy a view of the stars from our bubble tent.  Such a cool experience!  I slept with my contacts in, which I never do, but it was great because when I woke up in the middle of the night I could see all the stars.  Just like being outdoors without actually being exposed to the elements!

After another delicious breakfast of a spinach omelet, fruit, toast, fresh squeezed smoothie, and coffee (which I failed to take a photo of), we begrudgingly set back out for the US…. but not without a poutine stop at McDonald’s before the border! 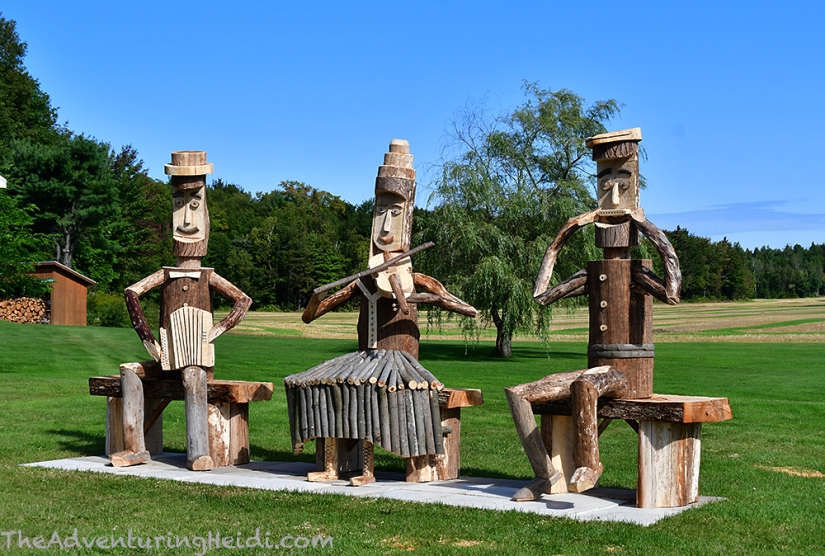 Crossing back to the US was a bit more intense than when we crossed into Canada.  A lot more questions, the border patrol dude flipped through all the pages of our passports, and we had to show the rental car agreement (come on, if I was sneaking a car into the US, it would be a Nissan Skyline, not a Toyota Corolla…).  But needless to say, they found us acceptable to allow back in… ha!

I can definitely see myself going back to explore more of Québec, especially the smaller villages.  Visiting a large city like Montreal is really no interest for me, but luckily there is a lot of nature and awesomeness to see in the province!  I feel like we just got a small taste, so like I like to say all the time now… “Next time!”