All good things eventually come to the end, and so the end began for my week in Iceland.  Though sad, I wasn’t devastated like I was during my first trip to be heading home.  A severe storm was rolling in the next day, and “do not travel” advisories were being issued and flights being cancelled, so I felt like I was fleeing just in time.  Plus, I have to admit, the lack of daylight made this trip a struggle for me.  And, well, I knew it wouldn’t be the last time I’d be in Iceland.  I’d just come back maybe when there was twenty hours of sunlight instead of four.

I woke up and put on my layers for horseback riding at the farm I was staying at.  It was very cold out… Wyoming cold… meaning about 20 degrees with a wind chill of about 10 degrees!  Pretty brisk to be trotting around outside, but nevertheless, I wanted to ride my first horse (yep, I am a Wyoming girl that has never ridden a horse!).  Dressed, I proceeded to eat up several containers of pear skyr I had left (oh how I’ll miss it), and some other odds and ends I couldn’t bring home.  There were two woman also staying at the guesthouse with me, so I said hi and learned they were from Tennessee (this was the trip of hanging with Americans!), and they were also going horseback riding.

We wandered out to the stable, and were given thick, warm coveralls to put on and riding helmets.  I was the only one riding that day that had never been on a horse, and I must admit, I was clueless and wanting an owner’s manual so I’d know what to do!  Honestly, that is my only complaint is I feel like I was not given very good instructions and that added to my anxiety.  Luckily one of the Tennessee gals was experienced and she gave me some tips when she saw the ride leaders weren’t stepping in.

We were introduced to our horses and then worked on mounting them.  Well, I need a boost to finally get up there, and before I knew it I was sitting on a horse… and absolutely terrified.  (I had such a death grip on the reins for the whole two hour ride that my hands cramped!)  I nervously smiled as we made our way out to Road 38, where there is a trail that parallels it.

But… I was still content.  The brisk Icelandic wind bit at my face as the sun struggled to come up in the sky.  I’m riding a fuzzy Icelandic horse in Iceland, how cool is this?!

As we settled in, we were taught how to urge the horses into tölt, a special gait that really only the Icelandic breed does.  Polar stratospheric clouds dotted the southern sky, which ended up  making the national news in Iceland.  We paused for photos and enjoyed the ride.  Overall, I had fun and I was happy I experienced something new, but I don’t think I’d be rushing out to riding a horse again, especially anything bigger than an Icelandic horse! 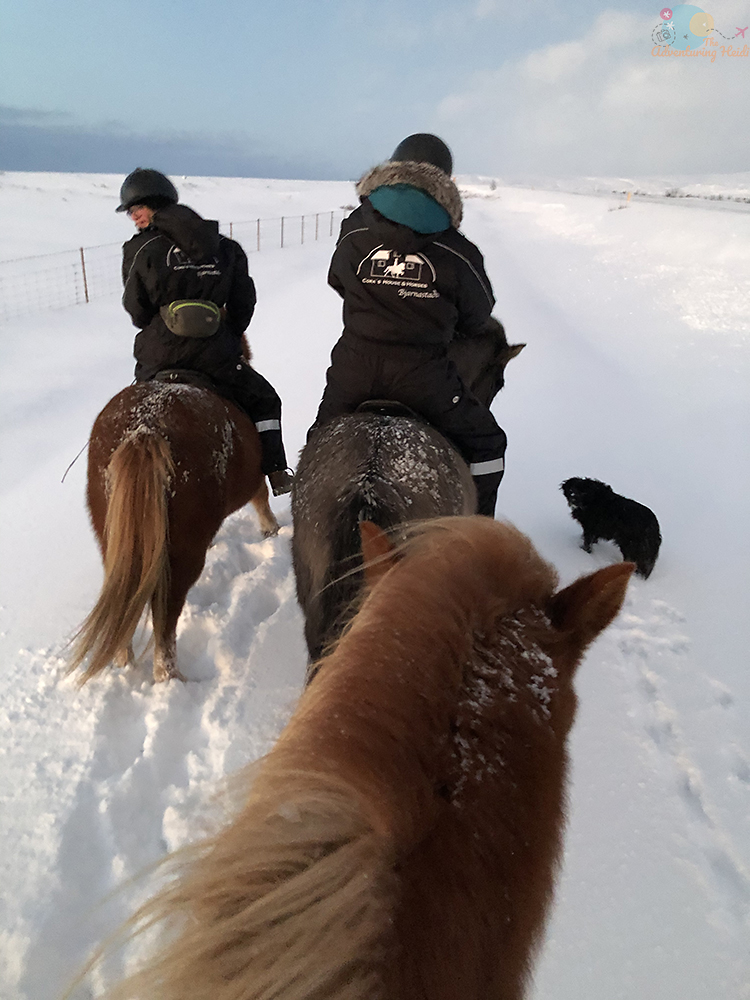 All done with riding, I changed into my traveling clothes (consisting of the usual leggings), and stashed away the rest of my items in my bulging suitcases.  After covering myself in snow brushing off the Dacia, I set out for the airport, knowing I was nearing my last few hours of being free to wander in Iceland.    I used Road 39 (Þrengslavegur) to connect to the Ring Road on Hellisheiði (foregoing going around the coast of Reykjanes, which I debated since it was actually daylight unlike the day of arrival).  Road conditions were probably the worst of my trip, being snow packed and icy.  Google Maps sent me on some city streets in Kópavogur and Gardabær before spitting me out on Road 41 which heads to the airport.

I couldn’t just head straight to the airport after fueling up in Reykjanesbær, I mean, I still had plenty of time to make it to the aiport which was sitting right there, so I decided to hunt one more church, Hvalsneskirkja.  So I headed west on Road 429 to Sandgerði, and then turned south on the tiny Road 45.  Hvalsneskirkja is a unique looking church made of black stone that sits on the barren Reykjanes coast.  Of course, the wind and snow decided to whip up something fierce as I approached the church, and I got pretty worried about getting stuck in the snow again after my experience the day before in Skógar.  So I parked the Dacia, and hoofed it in the blowing snow to grab some very quick photos.  Not my ideal plan for visiting Hvalsneskirkja, but at least I did get to briefly see it!  (I legit need to make a point of visiting Reykjanes longer than just passing through on Day #1 of my Iceland trips.)

I headed back on Road 45, and naturally the sun came out and I ever so briefly considered turning around to go back to the church, but decided to cut my loses, and continued towards the airport.

Returning the car at Blue Car Rental was easy peasy, even though I was stressed a bit about the horror stories of car renting in Iceland where they’ll charge you for the simplest door ding like $3000.  Needless to say, I did not have this experience, and was given the “all good”.  I managed to drive exactly 1500 kilometers, or 932 miles.  I was actually super surprised to hear I covered that many miles in a mere week in the winter – to contrast, my first trip was 19 days and we did 2280 miles, and it seemed like we covered most nooks and crannies and we had 14+ hours of daylight.  Then again, driving the Ring Road between Reykjavík and Hella sure does add up when you do it like four times in a week, ha!

I gave up on waiting for the shuttle to the terminal, so I decided to walk to the airport with my two suitcases and backpack through the snow.  I feel like the elves always have to get the last laugh, so while crossing a snowy parking lot I tripped over my own hiking boots and splatted face down in the snow, bags flying every direction, like a bad comedy.  A few people stared at me as I hurried to get up, looking around to see all who witnessed that.  Embarrassed, I walked even faster, making sure to keep my feet far apart from each other to avoid more disasters.

I headed straight for the tax refund once I got to the airport, smiling smartly to myself as I skipped the line as I had already filled out my slip (seriously, do it BEFORE arriving to the airport, it saves so much time!).  I ran into the couple from Maine who I met while petting Baktus on New Year’s Eve at the self check in, which was fun. After Icelandair really not caring my bag was overweight and insisting I self check it (seriously, I was being honest and trying to give them money…), I headed through security and was dumped out into the first of two duty free stores they force you to go through.  I took my time picking out some more alcohol to bring home that I’ll never drink (I still have all the mini bottles from my first trip), and some licorice and chocolate (it would be gone rather quickly).

Alcohol stockpiled (for unknown reasons), I took to stockpiling myself full of food before the seven and a half hour flight home – cheeseburger, fries, chicken nuggets, and one last, glorious Appelsín.  Finally my gate number popped up on the screen, so I decided it was time to head through passport control and one last duty free store.  Sigh.  It was coming to an end 😦

Lucky me, United States TSA told Iceland I needed special screening, so I got the backroom experience of having all my belongings searched (always fun with a lot of camera equipment), hiking boots measured to see if they were the same size, and my leggings swabbed.  I started doing the nervous potty dance after about twenty minutes, and thanked myself over and over for always being early for everything.  Finally I was deemed worthy of being allowed to travel back to my country of citizenship, and joined the crowds standing around waiting to board, because Keflavík doesn’t believe in chairs.

Trying to board, my boarding pass set off a screeching noise when scanned, and for a brief few seconds I legit thought Iceland was trying to kidnap me (seriously, can that wait for a trip during the summer months?).  The gate agent typed in some things, and I was allowed through.  Whew.  I eventually settled into my seat on the plane, which I never did catch the name of since I boarded from the rear.  I watched the lava coast of Reykjanes disappear (or imagined it, since it was dark).  Until next time, Iceland, as you know this wasn’t the last time!

On the plane I was treated to a seven hour long sunset, which honestly was completely amazing to see!  Though I love staring at the aurora out of an airplane window for hours, seeing the sun set for that long is also a special treat.  I did distract myself with some Icelandic movies, one that I deemed too riské for the preteen sitting next to me to steal glimpses of, so I had to switch to something more family friendly.

Land.  Deny being around livestock.  Wait forever for bags.  Nothing to declare.  Welcome back to the United States, Heidi!  I stepped outside, and took a long, deep breath of Colorado air.  Nah, it’s still not the same as Iceland air.

So did I find myself during this trip to Iceland?  My verdict is a no.  I knew so many people that hyped this up as a “Eat, Pray, Love” experience for me, and maybe I was expecting too much of that.  But I did travel internationally solo.  I rented a car for the second time ever (and first time with personal money, which is always a biggie).  I learned how awful the lack of daylight is at 65° latitude in the winter.  I found a crazy familiarity with being back in Iceland, being able to navigate without a map and just feeling comfortable and at home with my surroundings.  I dealt with the crises of a last minute canceled AirBnB, foot murdering shower door, and a very stuck Duster in a snowdrift.  I rang in 2020 with great company under a sky of fireworks, with dreams of having the best year ever (we know how that all changed in about March on a worldwide scale).  I conquered a nearly lifelong fear of deep water at Silfra, I rode a terrifying beast known as a horse, and shed tears on a glacier.  But I think it served more as a distraction from processing emotions I could ignore while I completely replanned this trip about a month before it happened.  Arriving back home it was back to work, back to life, and back to realizing I needed to figure out how I felt about somethings.  Strangely enough, I dived right back into crazy training on the bike – something ignored for two years.  I found myself back on the bike, not at 65°North.

I will be back to Iceland, though I am not sure how soon due to trying to recover financially from footing the bill for this trip solo, and the current worldwide situation that has put all our lives on pause for now.  I want to get back to the highlands, the gravel roads, and my glorious Westfjords.  To run wild in the midnight sun, chase waterfalls, and drink all the Appelsín!

8 thoughts on “Finding Myself at 65°N – The Solo Icelandic Winter Adventure Day 8: Riding Off Into The Sunrise”