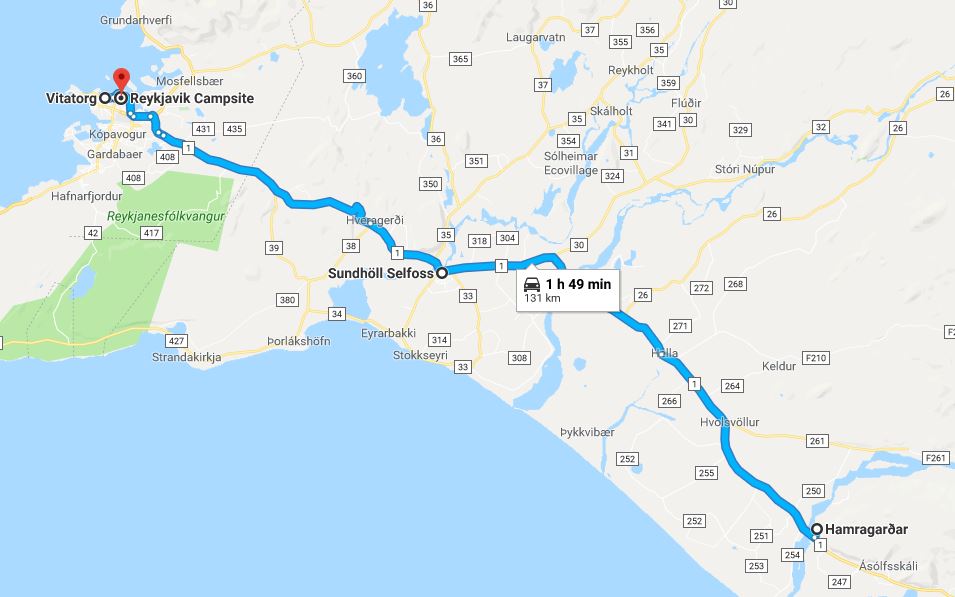 Time to leave the wild.  Our last full day in Iceland marked us completing our very large circle around the entire country as we would head towards Iceland’s biggest city (and the world’s northernmost capital), Reykjavík.  We would be traveling on some familiar roads as wayyyyyy at the beginning of our trip we traveled on the Ring Road from Hella to Reykjavík.  Things were coming full circle!

Because the Hamragarðar campground is overcrowded and charges for showers, we decided to stop at the town swimming pool in Selfoss, Sundhöll Selfoss, for a nice geothermal soak and shower.  Town swimming pools in Iceland are amazing, and I much rather spend the 1000ISK (less than $10 USD) for a swim and soak then whatever high fee charged for a few minutes of water at a campground.

Kubo and I paid our entry fees, and set out to our respective locker rooms for our mandatory nude shower.  And finally, on Day 18, I had my first “I don’t speak Icelandic!!” moment!

The Selfoss elementary school must have swim/PE-type classes here, and I had no idea half the locker room was devoted to them.  I walk in, find an empty locker, and take to changing as the locker room attendant comes up to me speaking a flurry of Icelandic.  I have an expressive face, so I only can imagine what I looked like, so she finally pauses and states, “You don’t read Icelandic, do you?  This is for the school children.  You must use the other half!”  Whoops!  I apologized, and grabbed my belongings and made my way over to the other side of the locker room.  I knew she was watching me closely, but by now showering nude was a standard habit in my mind, so I had no problem strutting myself over to the communal showers (and now I have to remind myself not to do this back home in the U.S…).  The other traveler who wore her bikini into the shower was not so lucky, and she got a stern lecture about how she should remove it and shower naked (the girl looked TERRIFIED!).  Yep, they legit monitor you in Selfoss to make sure you do the pre-swim shower correctly!

I settled into a one of the various hot tubs as a local lady informed me in very broken English that I was getting into a “hot” one.  I found it quite comfortable, and she smiled at me in an approving way.  Kubo joined me, and we tried out the various hot tubs, and then discovered there is a near freezing tub you can dip into, so we did that a few times which felt amazing on our sore muscles.  The school children had the run of the whole place, and literally they were running around the pool, which slightly horrified me as it’s such a big thing in the U.S. about never running around pools.  But what would you know, they all survived!  It was neat to see how their PE time is spent.

There is also a lap pool, and then a swallower pool with a big water slide.  Once the children seemed to disappear, I took to the water slide, which was a blast!  Then Kubo and I jumped in the lap pool, and promptly got a stern lecture from the teachers about how we were in the lanes for the school.  Ha, the troublemakers of the place, apparently!

We definitely spent a decent amount of time at the pool, but who can blame us with that nice, warm water and a water slide?!  Finally we dragged ourselves out, and took showers and got ready for the day.  (Side note, I felt so weird brushing my teeth here… like announcing, “Hey, I’m a dirty van lifer, don’t mind as I clean up in your facilities!)

On the road again… passing through familiar Hvergerði, where we spent our very first night, and the mossy lava fields that lead into Reykjavík.

Wow.  After all the days spent in very small villages, Reykjavík was overwhelming.  In a country of roughly 316,000 people, the capital region is home to over 200,000 of these people.  Though still a “small” city when compared to the metropolises of New York City, or hell, even Denver, it seemed very weird to see all the wide highways and cars and people everywhere.  However, it all seemed to work smoothly… roundabouts kept things flowing, there didn’t seem to be the angry road rage that big cities bring, and it was easy to navigate.  Huh.

I had picked out Vitatorg parking garage for us to park Carl in, which is nearly across the street from Sun Voyager, and seemed close enough to all the things I wanted to see without having to drive the van on the small, narrow downtown streets.  And the parking garage was crazy cheap… 80ISK an hour!  That’s less than 75 cents!  Woohoo!  Granted, Carl barely fit in the parking garage height-wise, but we found a spot, stashed valuables (mainly my DSLR as I didn’t want to lug it around the city like a true tourist), and closed up the curtains and headed on our way.

My first destination I absolutely had to get to was Kattakaffihúsið – the cat cafe!  Unlike in the US where the cats must be separate from food service areas in cafes, at Kattakaffihúsið the kitties are right there with you as you enjoy your food and I was over the moon to meet more Icelander cats.  This is a vegetarian/vegan cafe, and we decided to get some snacks here, with Kubo getting the vegan sandwich special and an espresso, and I opting for raspberry chocolate cake and a latte.  (I would’ve smuggled the cats out if I could’ve… but these two lucky kitties below both were adopted a week after I was there!)

Next we headed for Laugavegur, one of the main downtown streets where many shops and restaurants are located on.

We browsed various stores as we wandered down the street, though a lot of them were very touristy shops filled with cheap souvenirs.  I really enjoyed Litla Jólabúðin, the Christmas store, and also found some nice postcards that I later framed at another store.

Our next main stop was the Icelandic Phallological Museum… yep, the penis museum!  I mean, how can one not visit here?!  Admission is 1700 ISK, and I say it was worth it.  283 specimens from 93 animals (including elves and trolls… and yes, one human) filled this museum, along with other penis-related items.  I dare say, it actually really educational at times!

We were getting hungry, so after the museum we walked across the street to Noodle Station, a chain of pho-style noodle restaurants that are super cheap but delicious.  I mean, not sure where else Kubo and I would’ve been able to eat for $30 for both us in Reykjavík that wasn’t the hot dog stand!  It had also started to rain, so this was a good chance to enjoy some noodles as the rain fell, and then disappeared.

Next up was Hallgrimskirkja, Iceland’s largest church that was designed by Guðjón Samúelsson, and was supposedly inspired by Svartifoss.  Construction started in 1945 on this Lutheran church, and it was completed in 1986.  It is one of Iceland’s tallest buildings, and you can take an elevator to an observation deck, which I kick myself for not doing as the panoramic views over the city are quite unique thanks to all the brightly colored buildings.

After Hallgrimskirkja it was time for some more exploring… and ice cream!  Yes, a day late, but I finally got my ice cream promised to me by Kubo during our Fimmvörðuháls hike!  We stopped in at Eldur og Ís, and I opted for blueberry ice cream this time.  We also ended up getting more coffee as well, as Icelandic coffee is just that good!

After popping into a few other stores, we headed towards Harpa.

Harpa was one of my favorite parts of Reykjavík, probably because I found it so interesting to photograph.  We wandered all around the outside, and then inside a little bit.

Harpa sits right on the harbor, so we wandered around the piers, looking at boats (including the large Icelandic coast guard ship that was docked), and watching some locals skateboarding and crashing and wrecking themselves on nearby concrete stairs.

By now it was clouding up significantly, and Kubo and I had opted not to wear rain gear as we explored Reykjavík so we both knew the line of clouds rapidly crossing Flaxaflói could mean a very soggy experience.  We hustled down the shore path, briefly stopping at the Sun Voyager sculpture (which I managed to snap a photo of between the dozens of people clamoring to pose by it), and started crossing the street as the rain unleashed.  We ran to the parking garage… whew, we made it without really getting too wet!

We set out for the Reykjavík Campsite, which is an impressive expanse of trees and green next to Laugardalslaug (very large swimming pool) and the city hostel.  We checked in, and found a spot to park… and I spent the next few hours in the bathroom sick with food poisoning.  Yes, that’s literally how I spent our final night in Iceland 😦  I’m not sure what caused it (the last barely cooked hamburger was eaten five days ago), but I wouldn’t wish that on anybody.  Not ideal, especially since we had thrown around the idea of visiting the swimming pool for one last soak.  Sigh.

Overall, Reykjavík was cool, but I wasn’t horribly in love with the place (though visiting on New Years Eve is one of my dream things to do).  Then again, I’m not the type of traveler that likes visiting cities – I go to places for the natural sights.  I had left some things off of our plan for the day that I had on our itinerary, such as visiting Nauthúsagil (gorge with waterfall inside) and Heiðmörk (beautiful park on the outskirts of Reykjavík), and I wish we had done them.  Hindsight is always 20/20, though.  We were exhausted from all our traveling, so snacking our way through Reykjavík was okay in the end.  And I must remind myself that it was only natural that we would have to miss some stuff, you frankly just cannot see it all!

Follow along on our entire 19 day Iceland road trip adventure!  Click here for a comprehensive itinerary, with links to each day’s adventure.