It rained a lot during the night, but there was a bit of sunshine when we woke up in the morning.  But Kubo and I both had the feeling it wouldn’t last, so part way through preparing breakfast we decided to take a break and tear down the tent while it wasn’t totally wet.  As the dark clouds starting rolling in, we were able to cook up breakfast and get it in our bellies before the skies opened up and the rain started falling hard.  Yeeesshhh, it really is the year of no summer!

Our second full day of our Bighorns and waterfall hunting adventure would take us out of the national forest to Tensleep, west to Worland, north to Greybull, and then east back into the Bighorns.  I had never explored the northern part of the mountains, so this would be all brand new to Kubo and I!

We stopped quickly in Worland for gas and then a trip to Family Dollar to see if they had an air mattress.  Kubo is incredibly fond of camping with an air mattress (and he’s started to spoil me with it!), but sadly the night before ours blew out a seam.  Luckily I have an old memory foam mattress topper cut to the shape of Fozzy that I use for sleeping in my car that we were able to drag into the tent.  Alas, Family Dollar did not have an air mattress, but they did have pool floaties and Kubo schemed up a plan.

We headed north out of Worland, traveling through Basin, and then in Greybull we headed east on US Highway 14, which would take us back into the mountains.

Our first waterfall of the day would be Shell Falls, which is located right off the highway, and has a visitor’s center to accompany it.  The visitor’s center has a passport stamp (my new fond thing to collect), and also had great free maps of motorized roads in the Bighorn National Forest.  The Bighorns pretty much do not have cell service, which renders Google Maps useless (if you’re like and fail to download the offline maps…), so this map we picked up got a lot of use as we explored the next few days.

There are concrete walking paths and a viewing platform for the waterfall, which annoying vibrates with every footstep, therefore making long exposures challenging.  What struck me about Shell Falls was the moss and greenery… zoomed photos did not appear to be in Wyoming, at least not the dry Wyoming I’m use to!

After some quick sandwiches to quench our hunger, we set out again on our waterfall hunt, with the trusty map in my relieved hands (I was fretting hardcore about not having phone service, which frustrated me more that I was annoyed by that!). 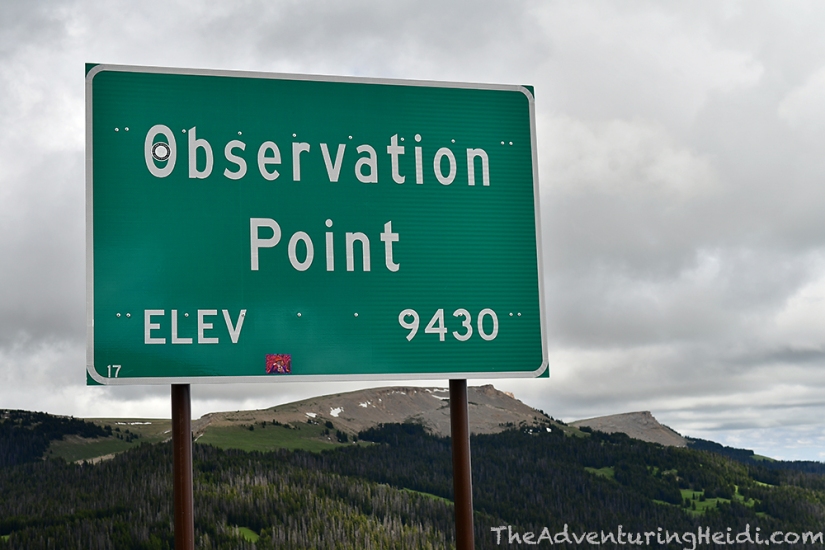 Our final waterfall to be hunted on this day was Paradise Falls (also sometimes called North Beaver Creek Falls),  This is considering a fairly “hidden gem,” and not a whole lot of information is out there, and I feel like some of the locals weren’t really willing to give up exactly where it was (this was before I had my handy map and could recognize the shape of the forest road it was located on).  Paradise Falls is a series of small falls that get progressively taller before a large plunge.  In the smaller ones you can slide down the rock into them since it’s covered with algae.  Now, I’m scared of water, but this seemed fantastic so I hyped it up like crazy to Kubo and everyone else I told about my trip!

Paradise Falls is located off of FR121.  This short forest road dead ends at single track trail, which leads to the falls.  It is downhill to the falls, but nothing too extreme.

Paradise Falls is indeed like a little sliver of paradise!  We walked around trying to take in different views, and debating on if we would get in our swimsuits and give it a try.  We had passed hikers leaving, including a group of hypothermic children that had swam in the water, but otherwise Kubo and I were all alone.  I think this made both of us nervous, as we didn’t know how deep each pool was and what all the hazards were.  We did eventually get in our swimsuits, and the mosquitos swarmed like crazy, and we stuck our toes in the FRIGID water, and finally got redressed and decided to head back.  Although we didn’t swim, it was still a great hike (only a couple miles round trip) and insanely beautiful scenery!

Now our attention turned to campsite hunting, deciding on just following a forest road until we found a dispersed spot of our liking.  It honestly didn’t take us long as we cruised down FR11 to find a great spot that overlooked Cone Mountain facing west.  We figured we would have a great sunset view, and the campsite had a rock cropping and trees for protection against the wind – and most importantly, we had no close by neighbors!  (Not counting the two campers which were parked and unoccupied during our two nights – the Bighorns have a huge problem with people leaving their campers and RVs to “save” dispersed camping sites.)

We set up the tent, tried to inflate the pool floaties, but then the air pump died so we decided on the foam mattress from Fozzy once again, and took to cooking dinner.  After dinner we watched the sun go down over Cone Mountain and soaked it all up.  This is the life!