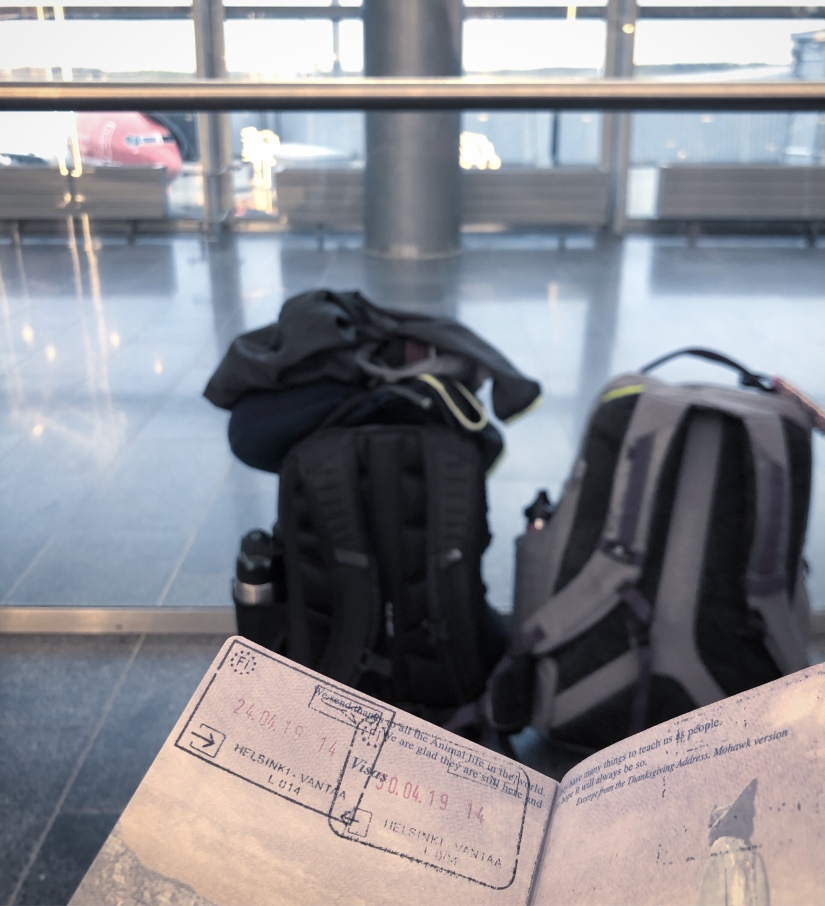 The morning of our sixth day came with a bit of sadness as we bid farewell to Mika and his family, and set out for Helsinki via the bus from Kotka.

Staying at the Hilton at the Helsinki airport made things super convenient for our 8am flight back to London, but morning still came very very very early – probably because we stayed up late drinking Finlandia vodka since we realized we had no vodka during our stay in Finland.  I feel like this whole trip was one long sleep-deprived day (but it was worth it).  Check in at the airport was on a kiosk since we had no checked bags, security was easy (except when they found my travel shampoo that wasn’t in a baggy and confiscated it… yep, Finland security is strict, too), and passport control had no line.  Once again we were left with plenty of time to hang out at the gate!  I did stumble across Gifflar mini cinnamon rolls in the airport, which I literally screamed in delight for when I saw these… these are the amazing cinnamon rolls I had eaten in Iceland!  I bought two bags… couldn’t help myself!

The minute I was situated in my seat I fell asleep quickly for the couple-hour flight back to London Gatwick.  This time we would have a seven hour layover before our 4pm flight back to Denver, so Kubo and I were up for a bit more exploring outside of the airport.  Border Force had a much longer wait time compared to our first flight inbound, but I think it was only roughly 40 minutes all said and done and we were free to leave with a new shiny 180 day visa.  We quickly found the train platforms after a bathroom break and discovered bag check at Gatwick is crazy expensive (£12.50 for each bag – needless to say, we took our backpacks on our adventure).  I chose the seaside city of Brighton to be our destination for a few hours.  Brighton is roughly a 30 minute train trip from Gatwick on an express train, and we figure we’d have a couple hours to rush through some things before heading back to Gatwick (anything is better than sitting in an airport!).

General plan for Brighton was find the English Channel, slap it (it’s a thing I do… slap large bodies of water…), find some lunch, and then head back.  For some reason in my mind I thought Brighton would be a quaint little village, but it’s actually a large city (in my mind – 288,000 people which is about half the population of my entire state of Wyoming), and very crowded and happening.  It also seems very quirky with its artwork and shops, and I really wish I had more time to explore!  We hustled through town, noting most pubs didn’t open until midday (noon), so we turned towards the ocean.  We walked through the Royal Pavilion briefly, which is a former royal family residence.  Here Kubo thanked me for not being one of those “Instagram travel blogger girls” who made him take 100 photos of me all dressed up in front of sights… ha, you’re welcome!

The weather was crazy gorgeous, with blue skis and not a hint of a rain cloud anywhere… definitely a nice day for a trip to the beach!  The Brighton Beach is made up of pebbles versus typical sand, which was unique to discover.  Anytime my shoes don’t fill with sand at a beach is always a positive!  I ran down and slapped the English Channel, and then we took to deciding where we would eat for lunch.  Kubo was wanting another traditional pub experience.  We finally settled on The Sussex Arms off of Market Street.

Sussex Arms had some really fantastic food!  I never really thought of England as a place that would have exciting food, but this meal was delicious.  I had the baked macaroni and cheese, and Kubo chose a meat pie.  Kubo also had a beer, and we both had tea… because gotta have a proper English tea, right?  I’ve never been one to put milk in my tea, but this moment made me obsessed with it, and I drank the whole pot by myself basically!  The portions were huge, so we felt bad leaving some on our plates, but it wasn’t practical for us to take leftovers.

Bellies full once again, but with our feet aching terribly (well, maybe mine mostly, this whole trip was marked with poor footwear choices), we hired an Uber from Sussex Arms back to the Brighton train station.  The driver was a local, and commented, “You are not from Brighton, are you?”  (It couldn’t have been the American accents…).  Funny enough, Kubo could answer “Actually, Brighton… Colorado.”  It was a very short ride back to the train station, but worth it to not slough it back on foot with our twenty pound backpacks.

Thirty minute train ride back, and it was time to do the security dance back through Gatwick (where we witnessed an American chick having an absolute freaking meltdown over them finding stuff in her carry on bag that she shouldn’t have, screaming “I didn’t know I couldn’t have this!” and crying and making a scene and throwing stuff around).  Once again, we arrived with plenty of time to spare, so we wandered around killing time until our gate would be announced.

Sadly we would not be on a Dreamliner on the return to Denver like Norwegian Air had originally said when we booked, and instead got the Wamos Air experience… old plane, no in-flight entertainment, no way to charge electronics, and some of the narrowest airplane seats I’ve ever sat it.  It didn’t bother me too much, as I was sleeping before we even took off in London!  A good thing, as apparently the plane sat on the tarmac for awhile.    Due to the delay and then apparently flying way slower than expected, we arrived in Denver a couple hours late, to texts from my mom going “Are you alive?!”.

The next morning we ate breakfast… in Brighton… Colorado.  Two meals in two Brightons, 4700 miles apart, in 24 hours time.  I love international travel!  Here’s to a whirlwind week and two new countries I can say I visited!